In one of the previous articles, we discussed sales numbers of the Japanese luxury brand. Things aren’t that great these days and the numbers are going down for all models, including those that used to be stable and strong sellers. Obviously, Infiniti needs something new, also something a little bit radical. At this point, the production version of the recent sedan concept seems like one of the things we might expect to see. Allegedly, it could come already in the next year, as the 2022 Infiniti Q80.

The new model is still just a rumor, but there is a big number of reports that suggest we could actually see something more than a concept finally. Besides gorgeous styling, we expect to see a completely new approach in terms of design, as this model is expected to be one of the first units to ride on Infiniti’s new platform, which will be all about electrifications.

In terms of base design characteristics, we have no doubt that the 2022 Infiniti Q80 will be one of those models that will serve to show Infiniti’s latest achievements. Only by the name, you can easily conclude that this is going to be a genuine flagship model, although the latest reports suggest it won’t be full-size, but rather a mid-size sedan, which will compete with models like Mercedes-Benz E-Class, BMW 5 Series etc. The core of the new sedan will be a new platform, which Infiniti develops for future models and one of the key characteristics of this platform is electrification. It is expected that initial versions of the upcoming models will be coming as hybrids, while all-electric versions are no exception. The same thing is expected with the 2022 Infiniti Q80, in terms of powertrain.

As we’ve just mentioned, the 2022 Infiniti Q80 is expected to be all about electrification. Therefore, we presume that the initial version of this sedan will come as a hybrid. The first thing that comes to mind is that the new system will be based on the company’s new turbo-four engine, which is characterized by a variable compression ratio. Of course, we count on a big help from electric motors. This will be a flagship model of a premium brand, so we expect nothing less but plenty of power and excellent performances.

We also count on an all-electric version in the future. It probably won’t be ready for the initial launch but should arrive soon after. It is still early to talk about details, but we count on strong numbers in terms of power and acceleration, as well as on the competitive range. Nissan has a big experience in building electric models, so there is no reason why we shouldn’t expect anything but great things from the 2022 Infiniti Q80.

Infiniti never had aesthetical issues in the previous years. Only in the last decade, we have seen several amazing-looking concept cars. Unfortunately, none of them entered serial production, though we have to say that some of the current models in the current lineup look pretty good. However, it looks like this will changes soon and that the 2022 Infiniti Q80 will come heavily based on the Q80 Inspiration concept. In terms of the design language, this means further enhancements of all those curvy lines that we have been seeing the previous concepts. On the other side, the rest of the body may look more interesting than you would expect. This particularly refers to the sloping end of the roof, which brings a little bit of Porsche Panamera flavor. Will the production model comes with the same approach or not, it’s hard to say at this point.

When it comes to interior design, it’s still early to talk about details. Still, we may presume some of the most basic characteristics. This particularly refers to the base seating configuration, as we count on a typical 2+2 layout. Also, one of the most interesting details about the concept is the lack of B-pillar and rear suicide doors. Such a design ensures much easier access to rear seats. In any case, we have no doubt that this model will offer plenty of legroom in both rows, while the cargo area should be decent as well.

On the other side, it’s hard to predict anything more precise about the dashboard layout, though we count on a pretty stylish look, full of quality materials, lots of tech goodies, and a high level of overall opulence.

Although we are still waiting for the official reports, some sources suggest the new model might arrive already in the next year. When it comes to the price, potential rivals start around 50-55.000 dollars, so we may expect something similar from the 2022 Infiniti Q80. 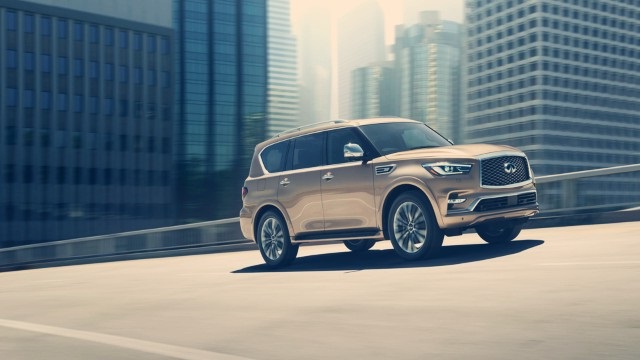